Like so many remaining objects of “Americana” the Gray Ghost Inn has a fascinating story including models and gangsters, a prison break and an FBI chase.

In the mid 1950’s, the ski-boom came blazing through Vermont. Among the most exciting new developments in recreational sports was the Mount Snow ski area. Mount Snow would become one of the most accessible, fun, and enterprising ski areas of this century. The influx of skiing visitors to Vermont raised the demand for local lodging. John Yunos, master plumber and tax assessor for the town of Dover, was one of the first to respond to this need.  He began construction of a simple two story lodge with a cavernous basement. The inn, then called Snow and Sun Lodge, was opened only a year after Mount Snow resort had opened.  The twenty room lodge was, according to the author Haden-Guest, “…unpretty, and being built of cinderblocks with an asphalt roof.” 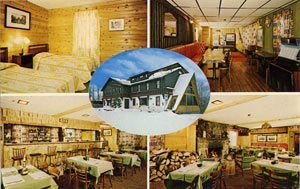 The inn was purchased in 1970 by a former horse trainer whose career had come to a sudden halt due to accusations of embezzlement. The horse trainer’s name was Buddy Jacobson. Buddy began to work on the lodge which now had approximately thirty rooms. Buddy did most of the work himself and was instrumental in the installation of the numeric-door locks. Down on the docks he made a “deal” and got a quantity of wormy chestnut, which now lines many of the rooms, used, as he said “to impart a rustic look.” The newly named Norway Lodge was run more with a focus on profiteering than customer service. Buddy’s policy was to not give refunds no matter how awful his service or the guest experience had been. At the time, he would have bands play where the TV is now in the lounge and serve up to 200 people cheap spaghetti dinners often sitting on the floor with a plate in their laps. Buddy soon earned a reputation for being a shady innkeeper and got booted from the local lodging association but only after what was known as “the nun incident.” The nun incident occurred when Buddy checked a group of nuns into one side of a hallway opposite a group of firefighters, who proceeded to get drunk and rowdy.

Buddy had numerous girlfriends, but a favorite was Melanie Cain. They had a lengthy but tumultuous relationship and when Melanie got tired of Buddy’s infidelity and lies she left him. When Melanie started seeing another man by the name of Jack Tupper, Buddy got extremely jealous and assured her he would get her back. The details of the murder, which took place in Buddy’s Manhattan apartment, are sketchy but most accounts agree on the main things. In August of 1978, Jack Tupper was bludgeoned with a hammer, stabbed multiple times, and was shot seven times according to the autopsy report. The body was then put in a moving crate, transported to the Bronx, and dumped in a vacant lot and set on fire. Buddy and a man accused as his accomplice were arrested shortly after the body was found as the two rode in Buddy’s white Cadillac two miles south of the lot with blood on their clothing and the smell of gasoline permeating the car.

After a sensational 11-week trial that ended in April 1980, Buddy’s accomplice was acquitted and Mr. Buddy Jacobson was found guilty of second-degree murder. 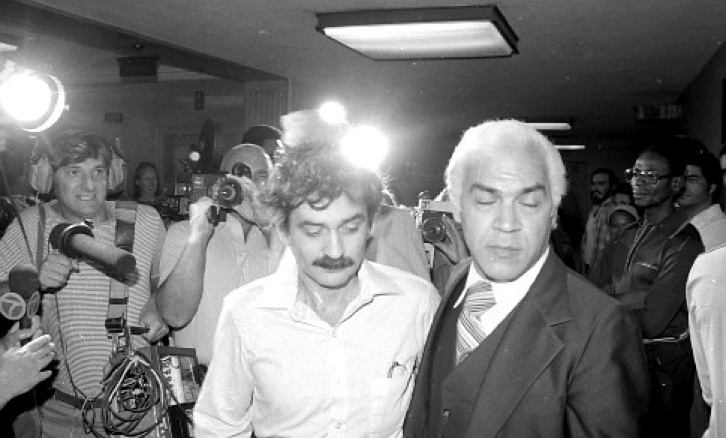 Buddy Jacobson being led out of the courtroom by his attorney NYT.

While awaiting sentencing, Buddy escaped from the Brooklyn House of Detention. The escape was orchestrated by Buddy and carried out by the innkeeper of the Norway Lodge. As a local barman who saw the innkeeper leave explained, “The guy, Tony Two-Suits, wasn’t too bright.” He left Dover at 3am in the morning to go and see Buddy, who he owed a sum of money to for a non-payment on a lease agreement for the Norway Lodge. Tony DiRosa, dressed in two suits, entered the jail to see Buddy. After the guards had been changed at the end of the 4pm shift Buddy Jacobson, dressed in one of the suits, walked out. The story goes that Buddy went straight out west, heading to California, but according to a local person who I interviewed recently, Buddy actually came to Dover and hid in what is now room 301. When the FBI came to the Norway Lodge looking for information on Buddy’s whereabouts, DiRosa claimed to know nothing. Buddy was seized nearly six weeks later after a transcontinental manhunt and was sentenced to one to seven years of additional time for his escape. Buddy Jacobson died on May 17th 1989 after having served his last days at New York State prison at Attica. Tony Two-Suits got five years for aiding Buddy’s escape, and non of what Buddy had promised. The Norway Lodge became neglected and went back to Yunos who had sold it to Buddy originally. The inn was sold again in 1980 to a couple from New Jersey who named the infamous inn the Snowbird Lodge. Despite their best efforts, they could not, at their own admission, make a go of it as, “it did not snow for three years straight.”

A young man from Pennsylvania by the name of Danny Stevens bought the Snow Bird Lodge in 1983 and started to clean it up. He named his new lodge the Gray Ghost Inn after his favorite fishing camp in Maine. The Gray Ghost got a facelift, a new sign, and a deck out back and was open for business again. Danny was a short lived innkeeper however; he sold the inn to the Collingwood’s on October 31, 1984. The Collingwood’s made many improvements over the sixteen years they owned the business. The Collingwood’s grew the business as well as the inn’s reputation. In January of 2000, the Thorssons bought the inn and have run it ever since, adding to and updating the property throughout the years. In 2003, they added a new section to the building, bringing a facelift as well as the addition of a spacious lobby an outdoor pool, and a chicken coop.  Another fine addition to the Gray Ghost has been three beautiful daughters!